In creating the 2nd version of the West Hull FM media pack, I have decided to look at the choice of font for the text elements of the pack.

During the first example, I had just used a standard font within InDesign, and would change it through the design process, but given that major changes are being made to the spread, I feel that it is necessary to make a final font selection at an early stage.

The West Hull FM logo uses a rounded sans serif font for the station name, areas it serves, and the ways in which the station can be accessed, and I feel that using that logo will compliment the logo and give the spread a cohesive theme.

I have researched using the Adobe Typekit to find the font match, so that I can import it into InDesign and use it throughout the product.

The font looked familiar to me, but I wasn’t completely sure of the name of it, so I looked through the Adobe Typekit, making selection from Browse Mode to try to eliminate fonts that don’t match the elements of the font that I am looking for. 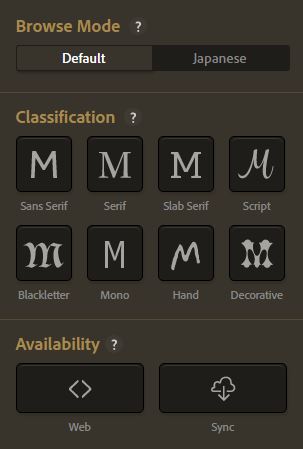 By using the settings, I have identified that the font is VAG Rundschrift D, and this is available within InDesign within the package that I have.  This has now been imported and will be used within the product going forwards.

My reason for this font being one that I recognised is that Volkswagen used this font for their car dealerships during the 1990’s, and it was from there that I had previously seen it.

I feel that my skills using the Adobe Creative Cloud package are good, but I would like to learn more about the full potential of the packages.

I have purchased books from Adobe Press to assist me with the creating of the project.  These books are for Premiere Pro, Audition, InDesign, After Effects, Photoshop and Illustrator.

These together with the online help via the Adobe website, and other guides on You Tube, I want to be able to maximise the work put into the project, but by doing it in the most efficient manner.

Over the last few days, I have immersed myself in the Fruit Market area, and collected a number of short video clips that can be used as General Views, or GV’s.

The advantage of having my own camera and tripod is that I’m not reliant on booking equipment out of stores, and I can just go and get some footage when I’m in the area.

Back on my computer, I have used Adobe Bridge to collate the video, and from there I am able to transfer the MTS files into Premiere Pro. 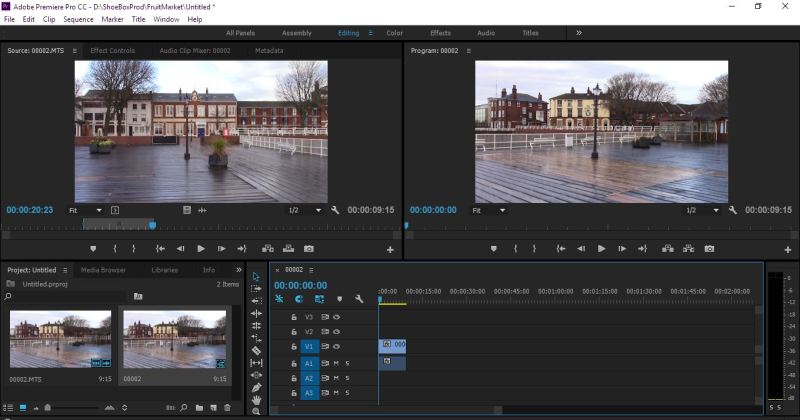 By using Adobe Bridge, I can keep track of all types of footage, be that video, photos, infographics and text.

Following the formative feedback, I have re-uploaded my magazine spread to the same online tools, Issuu and Joomag.

I have kept the original documents on there, together with this new version, so that I can see the changes made side by side 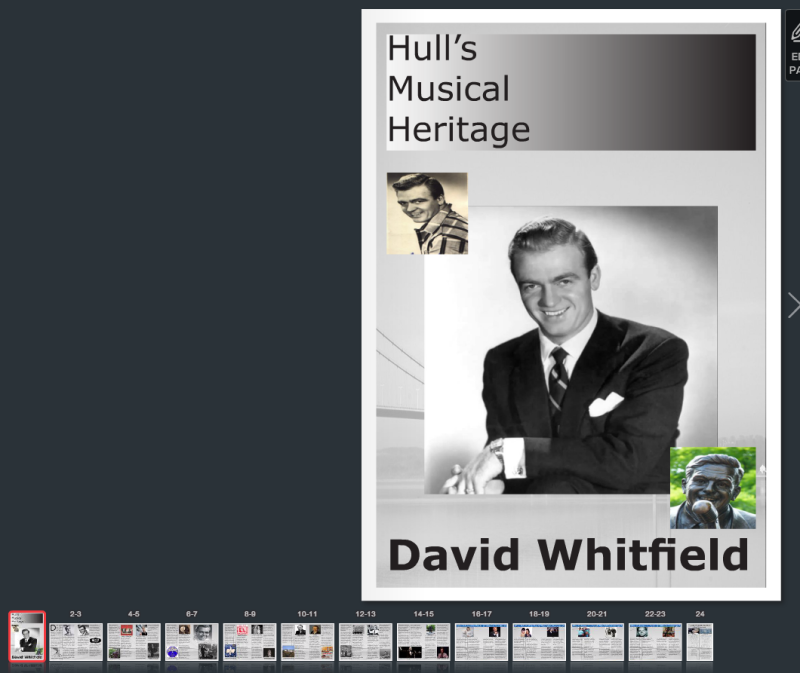 After creating my 3 minute documentary pitch video, I asked for my lecturer to take a look at it, to ensure that I was on the right track, and that I would be able to make any changes before the final submission in January.

The video was created in Premiere Pro (PP), and I have a copy of the PP project, together with an export in a MP4 HD 1080p video file.  By keeping both, I can watch the video file on my tablet, and make notes away from the newsroom.

The feedback received was extremely useful, and pointed out things that I had not considered.  When you are so focused on it, sometimes you miss the little things, and by getting someone else to look it over, means that the product can be the best that it can be.

Within the video, I was pleased to learn that the footage was well shot, and tightly edited, but my lecturer felt that the voiceover that I had added concentrated too much on the City of Hull, and not enough on David Whitfield.  This was confirmed when I spoke to one of my peers who agreed with the comment.

With that in mind, I will be re-writing the script, and recording it in the sound studio, and once that is complete, I can import the uncompressed WAV file into the Premiere Pro project, and re-export the video file to a MP4 file in HD1080p to upload to Vimeo.

After creating my initial magazine spread for David Whitfield, I submitted it for formative feedback from my tutor, and was pleasantly surprised with the comments that I received.

There were a few alterations that were suggested with the first draft, which I completely agree with.  As I have been so focused on the magazine spread for a few weeks, it was nice to have a few things pointed out that could take a good product, to one that is of a far superior quality.

The suggested amendments were

I also noticed another couple of items that I felt needed to be changed.

I will be publishing the new version on the same 2 online websites, Issuu and Joomag to be able to show the changes from initial to final output

After creating my magazine spread for David Whitfield, I have published it on 2 online websites, Issuu and Joomag.

On both websites, I uploaded a PDF, created using the “PDF Export” function within InDesign, which the software added the pages together to create magazine spreads.

By using a variety of online tools, the audience reach of the document, will be available to a wide cross-section of people.  The magazine also exists as a print based document, and can be sent for printing within the client’s outlet.

When filming my video, I relied on the microphone built into my camera for my audio.

I imported the raw video/audio into Premiere Pro, and reviewed the files, and found that the audio from the piece to camera files was of a very poor quality, and unsuitable to use in the final product.

On reflection, that was being very ambitious, given that I am recording in November, a month usually wet and windy, and the built-in microphone is particularly susceptible to wind noise.

I will be re-recording the piece to camera shots, together with an external microphone and recorder.  By matching the audio from the recorder to the video from the camera in Premiere Pro, I will ensure that the lip sync is absolutely spot on.

A lesson learnt regarding audio/video recording especially when outdoors.

I’m hoping to get a better understanding of the inner workings of many of the pieces of technology that are available to me within HSAD during Year 2.

I will be spending a lot more time in the studio, with self taught work so that I can move my knowledge forward to further enable me to get a good job after graduation in 2017.

I have no ties to any particular area in the country, or in fact the world, so I can look at jobs around the country, in order to make a difference in journalistic circles.

A move to Manchester and Salford is an option, given the potential of MediaCity, but also a move to London could also be on the cards.

I hope that I can share my journey with you all, and that any help and advice that you are able to give would be very much appreciated.

I’m working hard to ensure that I can maximise my experiences, and make 3 very important people to me extremely proud.

Having used Audacity for a number of months, it has taken me a little longer to get to grips with Adobe Audition than it should have.

However, once I have seen the full functionality of the product, I felt that it was necessary to learn more about it, as it, along with Cool Edit Pro, is an industry standard and will look good on the CV.

There will be further posts to this blog, looking at what can be done with voice and music files, using Audition to create better sounding files to export.