I have uploaded my magazine spread to online magazine tools, Issuu and Joomag.

Within Joomag, there is the functionality to add interactive content within a PDF export from InDesign.

Using the media option whilst editing the page, a selection of design tools appear so that you can directly add video, embed videos on Youtube and Vimeo, use Flash applications, add Soundcloud content, add music files, and pictures. 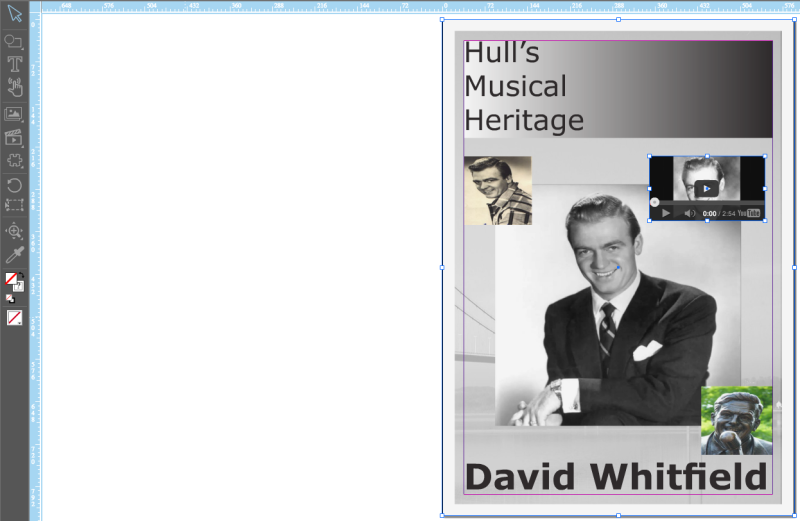 By considering all of these options, I would have to amend my InDesign PDF export, to leave blank spaces where I would want to add video or photos, but as I have kept all drafts from the process, this would be something very straightforward to achieve in the next stage of the development of the Video/Magazine spread.

Reading week has been a chance to recharge the batteries, do a lot of research and catch up on emails and texts.

I’ve been suffering “freshers flu” for the last few weeks, and because I’ve not been really looking after myself, it’s hit me really hard, so I’ve been quite thankful for a week where the timetable has been a little more relaxed than normal.

So a mix of books, emails, lemsip, potions and plenty of fluids, plus some good home cooking as well.

Ready to get back to classes next week, and hit the road running!!

Looking into the David Whitfield story, I have looked across different reference portals in order to get as much information about my subject as possible.

I will be using all of the following reference points to gain as much information about David Whitfield as possible.

By immersing myself in the story, then I will be able to gain as much knowledge as possible, so that I can make the initial video pitch a strong one, so that I can make the full documentary in Semester 2, whether it is part of the course content or not.  With this information, I will able to ensure that the magazine pullout has all the necessary information required for a finalised product.

As part of the assignment brief, I had to collate all of my initial research for the subject of my Documentary and Magazine Spread.

The requirements for the presentation to show this research had to include the following.

What the angle will be for the output?

What research I had done in order to select the person.

I selected David as Hull has been given the title of UK City of Culture for 2017, and music will be a large part of the cultural output for that year.  There is a rich history of music from Hull, with bands such as Everything But The Girl, The Housemartins, and The Beautiful South, but David Whitfield is not a name that is commonly mentioned in terms of the music history of the city.

There is a statue of David, outside the Hull New Theatre, but if you mention his name to people, then it is a struggle to get someone who knows his name.

I researched various subjects, and conducted polls on who people would be interested in learning more about.  I used vox pops, and various social media platforms in order to get a shortlist together.  I eventually got the shortlist down to a final 8, before researching into each person, trying to find the relevant angles that a story would require.

It was at this point that David Whitfield came out as the final selection for my piece.

I am looking forward to conducting research on him, about his life story, his contribution to the music industry, and his untimely death in 1980.

As part of the development stage of the 3 minute pitch, I have to ensure I have a strong story idea, not only for the pitch, but looking ahead to the documentary as well.

With the research I have completed, I feel that telling the story of a humble man from Hull, who went on to have a successful recording career over 25 years is a strong one.  Although the story is one that is one that is compelling, only the most loyal of fan of David Whitfield knows of the story.

By telling the story in a contemporary way, making full use of the technology, then I hope to reach the widest audience possible.

As part of my homework for the Bauer Academy, I have to listen to all different types of radio, be that hospital, community, commercial and BBC.  The challenge is to listen to the links between the songs, rather than just the music itself.

By listening to the links and seeing the way in which a presenter seamlessly fills the gaps between the music…or in some cases not so seamlessly, it means that I can see what I am doing right and wrong in my own career.

I know that I’m a long way from being a polished presenter, but I like to think I’m not too bad at it, but the main thing is that I’m really miss being on air.  Since moving to Hull, I’ve been two months off air, and I still get the shakes at the times when I would have been on air.

Still, I’m hoping to be on another station very soon, so if any current presenters have any advice, or want a willing volunteer to make the tea, I’m available 🙂

I have a lot of music, and over time I’ve tried to keep it organised, but have failed.  So today, I’ve finally managed to get all of my music onto one external hard drive which was split over three!

419 Gigabytes of Music now all contained on one drive so that I can make sure there are no duplicates, and that all the tags are sorted so that when I load it onto my Ipod, it doesn’t just say Track 1.

It’s a massive job to sort through it, but I’ve got to start somewhere, so the letter A seems a logical place!

Having used Audacity for a number of months, it has taken me a little longer to get to grips with Adobe Audition than it should have.

However, once I have seen the full functionality of the product, I felt that it was necessary to learn more about it, as it, along with Cool Edit Pro, is an industry standard and will look good on the CV.

There will be further posts to this blog, looking at what can be done with voice and music files, using Audition to create better sounding files to export.

It’s always good to get some experience on a degree course, and I’m very lucky to have my regular shows on TMCR.  Usually I do Sunday mornings between 10 and 12, but as one of the other presenters is a big fan of Chelsea, he’s swapped with me, so that he can watch the game.

On a Sunday, I have a theme on the show, be that “Songs with Run in the Title”, or “Colours”, but at the moment, it’s the A-Z of Music, and this week’s is a tough one with the letter I, as there aren’t that many artists who count in that letter.

It’s great to get hands on with the Myriad playout software, as this is well used within the industry, and nothing beats learning on the job!

If you’re free on Sundays from 10am, Mondays from 4pm, and Tuesdays from 7am, then please tune in at TMCR or via TuneIn.

Thank you in advance.

Radio – More powerful than you think…

Television is great don’t get me wrong, but to turn the box off and put the radio on is a powerful thing.  You can still work, and sing along, as long as you don’t type the lyrics into your blog!!

Seriously though, music can be a very strong motivator, especially is the beat is just at the right tempo.

I’ve sat at my desk, pretty much for the last 13 hours with the tunes on.  In fact the only time I’ve not been here is for bathroom breaks, and to put the washing on the airer!  Oh being a student is just soooo glamourous.

It’s worth doing, get some great tunes on, and work to the beat….thank you Absolute80’s!